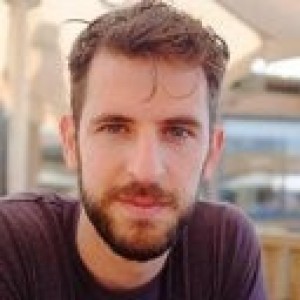 Both Drizly and Saucey have built upon an awesomely simple idea: quick booze delivery to people who want to drink, all via an app. It’s especially convenient when you run out of beer at a party, realize you haven no wine with guests on their way… or let’s face it, when you just really need two more fingers of the strong stuff but are already buzzed, or simply don’t feel like going out.

You’ve probably heard there are a few different “uber for alcohol” apps out there and the two biggest names are Drizly and Saucey… but do you know how they compare? They are actually different enough  that you may want to have both on your phone. Let’s take a look at the similarities and key differences so you can decide which to use.

Who should use an alcohol delivery service?

In the past, you might have had to send a “DD” (designated driver) for a beer run or just have to deal with the hassle of an extra stop at the liquor store during errands. Of course, late night booze runs significantly increase your risk of exposure to drunk drivers. So using liquor delivery services — although seemingly fratty on the surface — are just as smart as using Uber to get home from the bar if you’re already a drink or two deep.

They also come in handy when giving gifts that need to be delivered within the hour, or when a friend/coworker hits a milestone that needs to be celebrated asap. The last use case I’ve heard, albeit more controversial, is ordering hair of the dog for that crippling hangover after a long night of debauchery. While I don’t personally endorse drinking alcohol to cure your body’s reaction to…. drinking alcohol, I acknowledge that many do and withhold all judgment. 😛

Saucey and Drizly are two relatively new companies bringing booze delivery to the masses. Both companies are able to deliver alcohol directly to your door in the same way that Seamless, Postmates, or UberEats can cater a meal from your favorite local restaurant. Drizly can even bring your booze to a business address, and if you don’t need your alcohol right this second, you can schedule the delivery for a later date/time in advance.

Does Drizly or Saucey deliver to you?

Before you get too excited, make sure these apps service your area. Keep in mind that BaaS (“Booze as a Service,” yeah I just coined that) is still a new concept and currently only available in select areas.

That said, both firms are expanding at an impressive clip. Drizly says they operate in 101 major markets across 24 US states and Alberta, Canada.

Based out of Los Angeles, Saucey is currently only operating in a handful of cities so far, including in Southern California, Chicago, NYC, DC, and Dallas.

How exactly does ordering booze from Drizly and Saucey work?

To get started on Drizly or Saucey, you should first download their apps. If you just can’t handle another icon on your home screen or for some strange reason prefer the mobile web, navigate to their website instead (drizly.com or saucey.com) and share your location to see local inventory.

Browse, add items to your cart, check out, and expect hooch delivered within an hour. Of course, this all requires that you create an account and enter your credit card details, but this is 2019. All of that is pretty standard these days.

Still in high school? Unfortunately Drizly and Saucey do NOT make it easy to acquire booze underrage. Both apps require that you verify your age by showing the driver your ID before the he or she will hand over any alcoholic beverages. Life has definitely gotten easier for teenagers these days, but perhaps some things — like fighting for the right to party — may never change.

Drizly vs Saucey: What are the main differences?

Saucey and Drizly differ slightly in terms of who does their delivering. When you order through Drizly, your order is delivered directly from the retail store Drizly partners with, whether the store has its own driver or works with a separate third-party courier service.

Saucey works similarly to food delivery services like Grubhub or Seamless with its own contract drivers on board who get paid hourly to pick up / drop off booze as requested. Mostly this difference impacts hours of operation — which we’ll get into later — and delivery speed.

The biggest differentiator for end users (like you, boozehound!) is the delivery options presented by each app. For example, Drizly offers five different order types:

By comparison, Saucey’s delivery options are quite simple. They won’t ship you booze or allow you to pick it up from a local liquor store, but do allow you to choose between immediate delivery or schedule something further in the future.

How late do Drizly and Saucey deliver?

If you think a booze delivery service is ideal for the wee hours of the night, keep in mind that each app has its limitations. Saucey has specific hours, which may vary a tiny bit by region, but in general are:

That’s right; for better or for worse, Saucey won’t deliver after 1am on the weekend, or after 11pm on weekdays.

With Drizly, hours of operation are dictated by each of its retail partners. That means Bevmo’s delivery boys take off at 7pm, Drizly is no longer able to offer up their inventory. Thus Drizly’s hours vary a lot more than Saucey’s, and whether they can accommodate your late night binge requests is both geographically and partner dependent.

Overall, both booze delivery apps work well in most major metropolitan areas, but their coverage, hours, and selection varies widely by region. Either way, you’ll need to plan ahead to make sure you have everything you need before it gets too late.

Drizly vs Saucey: Which booze delivery app is best?

You’ve already read about the key differences between Drizly and Saucey just by hearing how the services work. But now it’s time to make a call. Which app can you trust with socially lubricating your party (or with congratulating a friend/coworker)? The chart below provides an overview of important details to help you compare each service head to head. 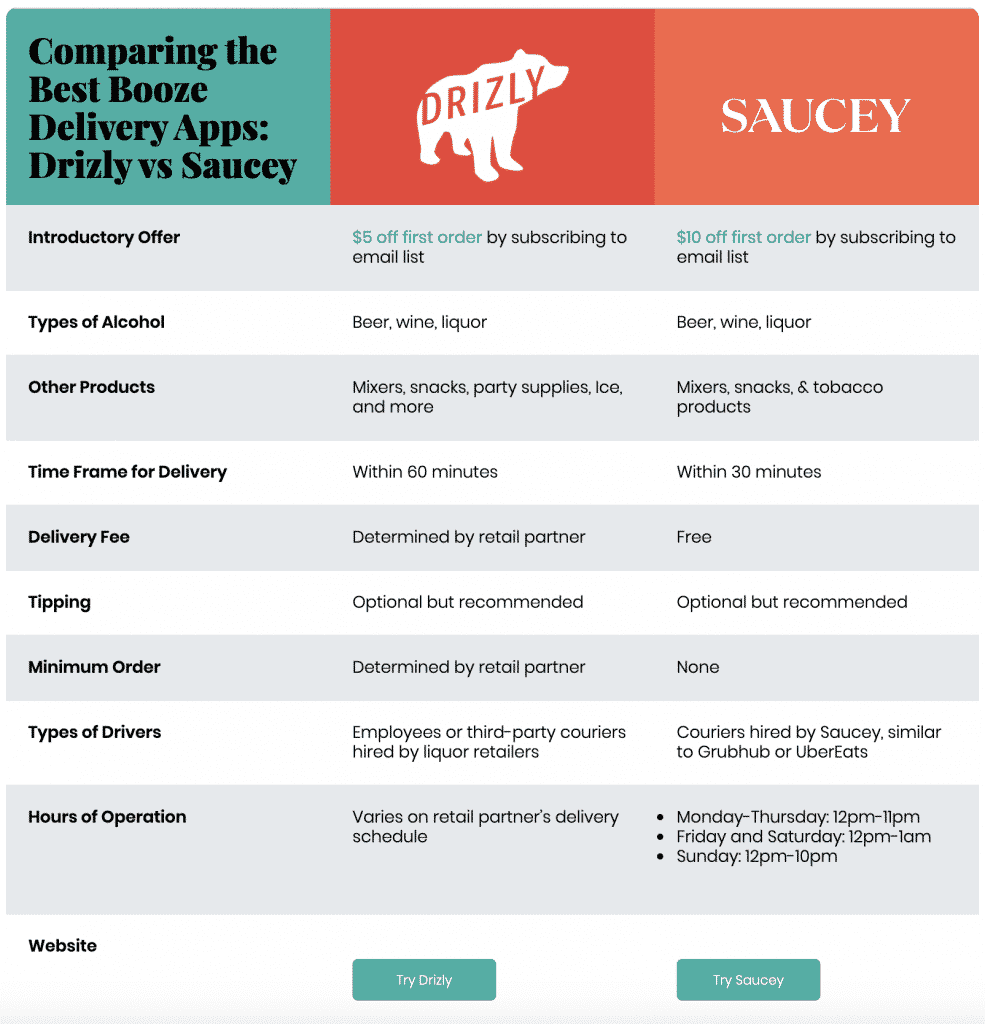 Hopefully that gives you a better idea of what you can expect with each service. Both sell beer, wine and liquor, as well as a few additional extras to compliment the good stuff.  Most of the features differ as well, so let’s discuss the pros and cons a bit more.

The Verdict: Which is better, Drizly or Saucey?

As I said earlier in this comparison, you might find reasons to use not just one, but both of these booze delivery services at different times. After all, Drizly seems to be the only one that delivers ice, while Saucey corners the market on tobacco product delivery.

Also, since these are new and limited services, it may simply come down to the service area rather than the features or price, so we suggest you start by downloading each and checking availability in your hood. You might need to stick with the one that’s in your area. Nonetheless, let’s talk about some of the main pros and cons so you can make the right decision for yourself.

Saucey: Who should use it?

As you can see, Saucey offers a better introductory discount than Drizly, a better delivery fee (can’t beat free!), and also faster delivery. That’s a pretty strong value proposition: paying less overall for quicker delivery. It also has no order minimum so you can get anything you want delivered, which is unlikely the case with the majority of Drizly’s retail partners.

Drizly: Who should use it?

The upside of Drizly is that it’s available in many more markets than Saucey, which is mostly only “a thing” in Southern California. As we mentioned before, Drizly serves over 100 cities across the U.S. and an entire province of Canada. Saucey’s offering may beat Drizly’s overall, but if it’s not available in your area, that hardly matters.

Another bonus of Drizly is that it sells many more extras that you might need for your party or get-together. Depending on local availability, they can likely bring you all the ice, mixers, party supplies and other things that you may have ran out of or forgot to pick up. With many more order types, it’s clearly the more flexible of the two options.

Which do we recommend, Drizly or Saucey?

Overall, if you want to know exactly how much you’ll pay, get faster delivery and have a standardized experience, we recommend Saucey. If it’s available in your area, we highly suggest you check them out  and enjoy $10 off your first order. If not, or you need a greater selection of items, go with Drizly. Personally, I’m excited to see how both of these companies grow and change over time, and plant to follow the space to see which model wins out over  time.

Review: Honeybee Health – Is it Legit for Online Prescriptions?

Huge.com Review — Is it Legit for ED?

Review: Rootine Vitamins — Is it Legit?

Last updated on January 8th, 2021 at 05:01 am In this article, we’ll review Rootine, a modern supplement startup that’s…

Review: Rootine Vitamins — Are They Worth it?

Hey, I'm Chase! Here are a couple of fun facts: I'm originally from Colorado and moved to San Diego for college. I worked in real-estate for my first few years, and then switched into medical device sales. I love writing about the future of healthcare, especially telemedicine.